It is with regret that I inform you of the reality in the 13th Amendment of the United States Constitution. “Slavery” and “involuntary servitude” still exist in the USA today, but in more covert forms than before. One of these forms is human trafficking. It is an issue that not only covers an international base, but strikes close to home as well.

According to the United Nations Office on Drugs and Crime, human trafficking is:

“The recruitment, transportation, harboring or receipt of persons, by means of the threat or use of force or other forms of coercion, of abduction, of fraud, of deception, of the abuse of power or of a position of vulnerability or of the giving or receiving of payments or benefits to achieve the consent of a person having control over another person, for the purpose of exploitation.”

Human trafficking is an umbrella term for illegal activities that fall under its definition, such as sex trafficking. Sex trafficking is when people are sold for work in brothels and sex clubs. It can also include forced labor or services. At times, people are tricked into thinking that they have found a decent job, but are made to work in inhumane conditions (e.g. factory or construction work). Cases also show that many become victims of organ removal for black market sale. Most individuals would think they are aware of sex trafficking. They would not consider, however, the multiple activities listed above as part of the human trafficking umbrella. According to the Polaris Project, human trafficking affects an estimated 700,000 to 2 million people of the global population every year.

As with any complex issue, there are numerous facts and perspectives to consider; below are the top 5 common human trafficking myths identified and deconstructed for the purpose of shifting one’s perspective.

Myth #1: “Women are the only victims of human trafficking.”

Truth #1: Contrary to gender stereotyping, men, young boys, and transgender people are trafficked across borders too, normally for sex work or forced labor. They appear “invisible” in trafficking reports because some are too ashamed too talk about what has happened to them, and avoid law enforcement. Additionally, the United States Department of Justice estimates that boys are less than 10 percent of the victim population – not a large number, but one that deserves attention.

Myth #2: “The victim of human trafficking is to blame for their own involvement.”

Truth #2: Various victims may be aware that advertisements for these activities may be a scam. However, their decisions are influenced by their economic conditions and desperation. In most scenarios, victims are taken from recruitment locations to a brothel and stripped of their documentation. To earn their documentation back, victims need to work their way to earn the required money needed to retrieve their documentation. They are allowed to return home after they recruit new victims to take their place. This vicious cycle makes traffickers rich while sexually exploiting victims. Families also sell young children to recruiters to work on farms or in better economic conditions. They are unaware that they are being trafficked. We need to stop blaming the victims and recognize their circumstances.

Myth #3: “Human trafficking and human smuggling are the same thing.”

Truth #3: The difference between trafficking and smuggle is force. Human smuggling is when a person gives his or her consent to cross borders. This is normally the case of someone entering a country illegally. Trafficking involves perpetrators using coercion and exploitation to move a person against their own will, which renders them helpless.

Truth #4: Politicians and law enforcement often manage trafficking activities. Ventures can only be maintained with high profits and a consistent supply of people. Organized crime networks use corrupt law enforcement to complete border leniency. They also  pay bribes for law enforcement: for example, a German diplomat in the United Arab Emirates was arrested for human trafficking charges.

Myth #5: “There is nothing anyone can do to help prevent human trafficking.”

Truth #5: By taking small steps into advocating awareness, human trafficking can slowly be destroyed. Many trafficking victims possess similar characteristics such as lack of education, illiteracy, and poor economic conditions. We can also educate communities about this issue and help push for legislation and restrictions. We should focus on educating younger generations about human trafficking. This way, they will be able to join our fight to end trafficking in the United States. 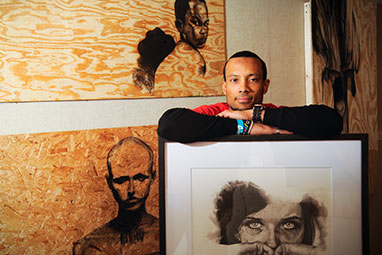 Josh Holt, a senior at Wofford College in Atlanta, uses his artwork to raise awareness on human trafficking. Above are a few of his pieces. Read more about his artwork here: http://bit.ly/1bwyJLS.